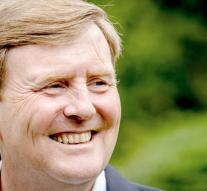 - Lieutenant Colonel of the Signal J. Verhagen and captain-lieutenant M. Moss are appointed aides of King Willem-Alexander. Both also contribute EMSD in their title: Executive Master of Security and Defence.

Until recently Verhagen worked as a staff officer cyber operations at the Defense Cyber ​​Command in The Hague. His predecessor, T. van de Krol, was honorably discharged from this position and was appointed adjutant extraordinary to the king.

Moss was until recently commander NH90 860 Squadron at the Naval Air Station De Kooy in Den Helder. He succeeds H. Spin on. He also was honorably discharged and appointed adjutant Extraordinary.