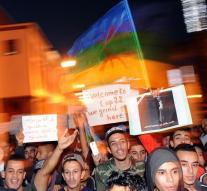 rabat - Morocco's King Mohammed VI has expressed its sympathy to relatives of a fishmonger who came to life in a gruesome way, possibly as a result of police action. Interior Minister Mohammed Hassan must themselves on behalf of the king to the relatives to convey the condolences. The prince has ordered a thorough investigation into the death of Mouhcine Fikri (28), Moroccan media reported Monday.

Across the country there have been in the weekend protests following Fikri's death. Policemen took Friday in al-Hoceima swordfish from him, because that can only be captured in a given season. When Fikri are good wanted to extract a garbage truck, he was crushed by the device is compressed in the refuse lorry. On the Internet, it was stated that police ensured that the presser was turned on and scattered images of his death.

The protests are reminiscent of the death of the fruit merchant Bouazizi in Tunisia in December 2010. He set himself on fire and deprived themselves of life, after agents wares were confiscated. Suicide led to mass protests and the fall of the regime of President Zine al-Abidine Ben Ali. His flight in 2011 sparked revolutions in North Africa which are called the Arab Spring.

Mohammed VI did in the years after violent street protests from some of his power to defuse political discontent. In recent years, including in the run-up to the parliamentary elections last month, the prince is accused of wanting to turn back the clock.