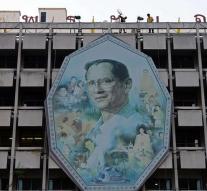 bangkok - Thai King Bhumibol is on the mend. This was announced by the advisory service Sunday. The 88-year-old prince is treated with an artery narrowing in the last month. Also, a drain fluid drained it pressed the brains.

The last public appearance of Bhumibol was on January 11, when he spent a few hours in his palace in capital Bangkok. The aged monarch last year has been repeatedly hospitalized because of various ailments. His fragile health of the population is worrying a long time.