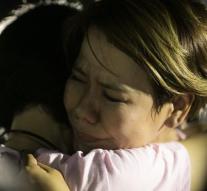 'With emotion I received the news of the death of King Bhumibol Adulyadej of Thailand,' said the Dutch king on the Royal Family website. 'For the Thai people he was a beacon of stability, even in turbulent times during his long reign of over seventy years. Again and again he stressed the values ​​of harmony and peaceful co-operation, 'says Willem-Alexander.

'With warmth think my wife, my mother and I returned to the meeting we had with him. Our thoughts go out to Queen Sirikit and other members of the Royal Family. '