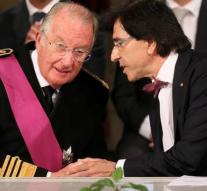 - King Albert of Belgium held at the request of Elio Di Rupo months of his mouth about his plans to abdicate and pass the baton to his son Filip.

At the express request of the then prime minister, King Albert kept his intentions secret three months. Di Rupo was afraid of destabilizing the country by the political party N-VA. This tells Di Rupo in the TV program broadcasting Royalty Flemish channel VTM Sunday.

On July 3, 2013 King Albert spoke to the people that he would give up the throne on July 21 away. His age and health no longer allowed him to carry out his duties as he would like. Three months earlier, Albert informed then prime minister Di Rupo. That, however, would not that between the publication of the news and the change of rule was a gap of several months.

'My big fear was that the N-VA would destabilize the country,' Di Rupo said in the broadcast that has already been seen by The Standard. 'The king had a date in mind:.. July 21 I did not have months to elapse between the publication of the abdication and the throne swap itself If you know the political situation in our country, and also the attitude of the N-VA, you understand why. 'Meanwhile, the N-VA is part of the Belgian government. The government formation N-VA would have promised to stop the attacks on the monarchy.

The broadcast Die Rupo is the first of the two specials 20 years of Royalty, which the program says goodbye to the viewers of VTM. The second special is seen on December 25th.