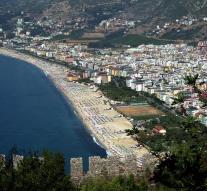 - A relaxing day on the Turkish Riviera for a Flemish family turned into a big drama. The 4-year-old Aleyna received while playing a sip of water inside and is since then three weeks ill in hospital.

'A heavy bacterial she has suffered by the seawater came while playing in her mouth,' wrote Naomi mother on Facebook. The girl was given antibiotics in the hospital, but they could not keep the pills because she vomited constantly.

In late July it seemed better to go with the girl, but now the doctors have declared her brain dead.


The Aleyna mother ends her Facebook post with a warning to all parents: 'People, be careful with your baby in subtropical countries. Not only Turkey but all warm countries. At the same symptoms pull immediately sounded the alarm. '