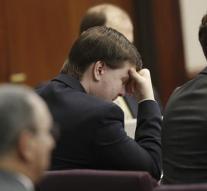 atlanta - The American who left his dying son in 22 months in June 2014 in a sweltering car, was found guilty by a jury. He can disappear behind bars for life.

According to the prosecutor, the 35-year-old Justin Ross Harris his son had deliberately left in the car parked in the scorching sun. The jury went into the story of the prosecutor that Harris wanted a life without children in order to make room for extramarital affairs. He also sent sexually explicit text messages to an underage girl. He sent the messages while his son was still in the car.

The boy, Cooper Harris, certainly was seven hours stuck in his car seat before he was killed. According to the defense, the man is his son simply forgotten. The mother, now separated from Harris, also refuses to believe that her ex-husband the child left behind deliberately.

Harris looked stoically ahead as the verdict was read Monday. He burst into tears when it was screened in the auditorium pictures of his deceased son.

The ruling follows on 5 December.