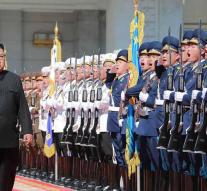 washington - The American president Donald Trump has received a letter from North Korean leader Kim Jong-un in which he proposes a new meeting between the two. And the White House wants it to continue, said spokeswoman Sarah Sanders Monday. We are already looking at a suitable date.

Sanders described the epistle as 'warm' and 'positive'. She told reporters that the military parade held in Pyongyang on Sunday on the seventieth anniversary of the Democratic People's Republic sent a good signal for talks on nuclear disarmament on the Korean peninsula. After all, nuclear missiles for the long distance were not shown. In his letter, Kim once again promises that denuclearization will remain central.

Trump, who had already announced the invitation on Friday, and Kim were talking to each other for the first time on 12 June in Singapore to talk about the dismantling of nuclear weapons in exchange for the lifting of sanctions and economic aid. The top, according to critics, yielded little concrete. They also wondered if Kim really is willing to give up the atomic bombs that the US can reach and, if so, how and when that will happen.