Home / World / Kim: North Korea is keeping deal with US 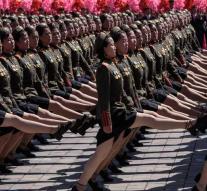 beijing - The North Korean leader Kim Jong-un told an envoy from the Chinese President Xi Jinping that he will abide by the agreement with the United States on nuclear-freeing the country. That has been announced by Chinese state television.

Parliament Speaker Li Zhanshu attended the festivities in Pyongyang on Sunday for the seventieth anniversary of the Democratic People's Republic, which says it is concentrating on economic development. He was told by Kim that North Korea hopes that the US will also meet the agreements.

Kim met President Donald Trump in June to 'work on the complete dismantling of nuclear weapons on the Korean peninsula', but the negotiations seem stagnant ever since. Both parties are blaming each other for the lack of progress. Kim will be consulting later this month with his South Korean counterpart Moon Jae-in and Trump has written a letter, which according to the Americans is a positive sign.