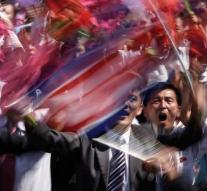 seoul - With a major military parade, North Korea celebrated Sunday that the Democratic People's Republic of Korea, as the country is officially called, is seventy years old.

The parade was watched by North Korean leader Kim Jong-un.

According to foreign media, long-range missiles were not shown during the parade. Tests with these intercontinental missiles, which could possibly reach the American mainland, were among other things the reason that the tense relationship between the US and North Korea deteriorated further last year.

Both countries have sought a rapprochement, although the discussions about denuclearization seem to be stuck.

North Korea arose on September 9, 1948. At that time Korea had been split up for three years in a southern and northern half after the Japanese occupation had ended during the Second World War.