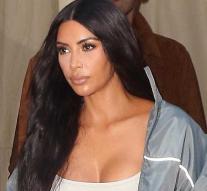 - Kim Kardashian visits the White House in Washington on Wednesday for a meeting with Donald Trump. Kim speaks to the US president about the reform of criminal law. Kardashian and her attorney Shawn Holley have prepared the meeting for months, according to Vanity Fair.

Kim Kardashian, the wife of rapper and Trump supporter Kanye West, asks Trump to pardon Alice Johnson, a 62-year-old woman who has been in a Alabama prison for a drug offense for 21 years. The reality star has drawn the fate of the detainee.

Kim owes the reception in the White House to Ivanka Trump, the daughter and personal adviser to the American president. Kim put the Johnson case on the map last year by paying attention to the situation of women in 1997 who was sentenced to life imprisonment for money laundering and drug-related crime. Alice previously wrote Kim a thank you letter for her unbridled commitment.

Kanye West met Trump before he was elected president of the United States. That was in New York in the Trump Tower.