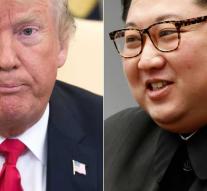 seoul - The North Korean leader Kim Jong-un left with his private jet from Pyongyang and is on his way to Singapore. The South Korean news agency Yonhap reported this.

A cargo plane also departed from Pyongyang, which probably also goes to Singapore. The cargo plane also landed in China earlier when Kim recently visited there. In Singapore, the North Korean leader met with US President Donald Trump on June 12.

Kim will sit down at the table with Lee Hsien Loong, the prime minister of Singapore. Trump is expected to have a conversation with him on Monday. The American president is traveling from the Canadian La Malbaie, where the G7 was held, to Singapore.