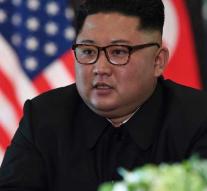 tokio - North Korean leader Kim Jong-un said at the summit with US President Donald Trump that he is open to a meeting with Japanese Prime Minister Shinzo Abe. This is reported by the Japanese newspaper Japan Times on the basis of government sources.

Japan and North Korea do not maintain bilateral relations. For Tokyo, the abduction of Japanese citizens in the 1970s and 1980s to North Korea is the biggest obstacle to normalizing relations.

The meeting could take place in September in Vladivostok, reports the Japan Times. Kim then attends an international economic conference in the Russian city. Earlier this month, the Kremlin reported that Kim may also meet the Russian President Vladimir Putin there.