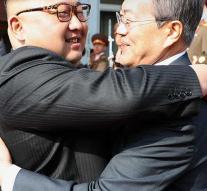 seoul - The North Korean leader Kim Jong-un is determined to continue the meeting with US President Donald Trump on 12 June. He made this clear to the South Korean president Moon Jae-in, with whom he had an unexpected meeting on Saturday, reports the North Korean state press agency KCNA.

A Moon spokesman confirms that both Korean leaders have spoken about the possible meeting between Kim and Trump. The two leaders exchanged ideas on how to make a success from the top.

It was the second meeting between Kim and Moon in two months. They spoke north of Panmunjom, a village in the demilitarized zone between North and South Korea.

The Moon office released a photograph of an embrace of the leaders of the two Koreas. According to the office of Moon, we talked about working out the peace agreements that the leaders agreed on two months ago.

Moon was accompanied by the head of South Korean intelligence Suh-hoon. Kim was in the company of Kim Yong-chol, who is in charge of relations between the two Koreas. The two countries agreed to start talking again at 'high level' on 1 June and that the leaders will meet each other regularly in the future.

Earlier Saturday, Trump twittered about 'very productive talks' with North Korea about how to continue the meeting with Kim.