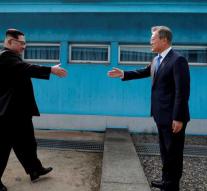 Kim sent a letter to Moon on Sunday to commemorate the dramatic relaxation in the relations that started this year, after years of confrontations marked by a series of missile tests by the North.

Kim was sorry that his plan to visit Seoul this year did not take place, as agreed at their third summit in Pyongyang in September. In the letter he expressed his 'strong will' to do so in the future, according to Moon's office.