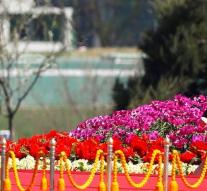 seoul - North Korean leader Kim Jong-un has promoted his sister to a major post. Kim Yo-jong has become a deputy member of the police bureau, the political body where important decisions are made and where Kim is the boss.

Kim Yo-jong (30) is now a member of life, just like her brother. Kim announced the appointment of his sister during a speech to the Central Committee of the Labor Party.

In that speech, he once again praised the country's nuclear weapons as a 'powerful deterrent' to ensure the sovereignty of North Korea.