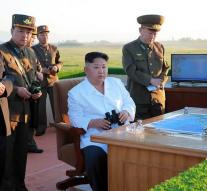 seoul - North Korean leader Kim Jong-un was present at the missile test that was conducted on Monday. After the test, he would have commissioned or made more powerful strategic weapons, according to the North Korean press office KCNA.

The ballistic missile that fired North Korea on the eastern direction landed after a 450 kilometer flight in the Japanese Sea.

Kim Jong-un would have said that his country 'will make a big leap forward to send a bigger gift towards the Americans. '