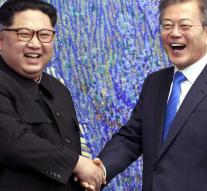 The head of the delegation had previously expressed the hope that he could speak to Kim. It was not yet certain that such a meeting would take place. No agreements had been made about that at that time.

The delegation must prepare for a third personal meeting between the leaders of the neighboring countries. It has to take place this month, but no specific date has yet been taken. The South Koreans hope that their visit on Wednesday will also have a positive effect on the negotiations with the US.

US President Donald Trump and Kim met in Singapore in June and reached an agreement on denuclearization of the Korean peninsula. The conversations stalled after Trump canceled a visit from his foreign minister to Pyongyang. Trump felt that too little progress had been made.