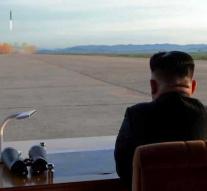 seoul - The North Korean leader Kim Jung-un wants to invite experts and journalists from the United States and South Korea to join in the closure of the site where nuclear tests have been conducted for years. That is what a government spokesman in Seoul said on Sunday.

US President Donald Trump has insisted on total denuclearization of the Korean peninsula ahead of his historic encounter with Kim. It will take place in three or four weeks, possibly in Singapore.

South Korean President Moon Jae-in spoke to Kim on Friday about this issue and about approaching each other. The state media informed the summit that Pyongyang would immediately stop nuclear and missile tests, close the base Punggye-ri and focus on economic growth and peace.