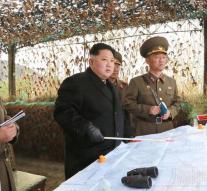 - North Korea is angry at his last friend China, where untouchable great leader Kim Jong-un is often irreverently referred to as Kim Fatty III. It is the Chinese noticed that Kim since taking office rather has grown in size. North Korea, however, does not find it appropriate that he publicly as 'fat' is defined.

Chinese and English newspapers to stop mentioning the request of the regime in Pyongyang with any representation in China suggests heavy or fat. Which is in North Korea experienced as an unacceptable insult. In Korea itself you will be put before a firing squad for such a remark, said some media.

According to the British newspaper The Sun working North Korean scientists at a fat burning medication for their leader. This is necessary, because the Korean leader would arrive in a few years, more than 30 kilos.