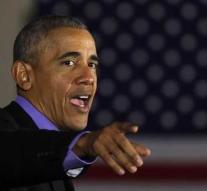 wellington - Internet entrepreneur Kim Dotcom wants to hear the American former president Barack Obama in the damage case around his company Megaupload. That should happen if Obama visits New Zealand this week anyway. Dotcom demands about $ 10 billion from the New Zealand and US authorities because his company is destroyed. His freedom has also been restricted for seven years.

Megaupload, a service where users could store files in the cloud, was addressed in 2012 at the request of the United States. The company would violate copyright on a large scale and also be used to launder money. The originally German Dotcom and the other directors of Megaupload, including a Dutchman, were arrested.

Dotcom has successfully challenged his extradition to the US so far. According to him, the case against him is politically motivated. 'The Obama administration had to take harder action against Hollywood against copyright violations. We were the perfect victim: successful, in the focus and outside the US. '