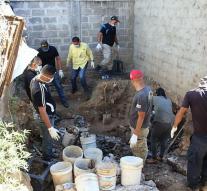 caracas - In a large revolt of detainees in a prison in Venezuela on Tuesday, twelve dead and eleven injured were killed. That confirmed a spokesman for the responsible authorities Wednesday.

It is the Jose Antonio prison in the eastern state of Anzoategui. Tuesday it came to a shootout between prisoners among themselves. 'Nine were shot dead, two died due to drug overdose and one died as a result of various injuries,' said the spokesman. 'Prison is in a transitional period. The battle arose between a group that is in favor of the changes and a group that is very opposed to it. '

Venezuela is struggling with crowded prisons and many institutions are in the hands of gangs, some of whom have access to machine guns and even grenades. The government in the South American country is working hard to put an end to the overpopulated prisons and the weapons that are circulating there.