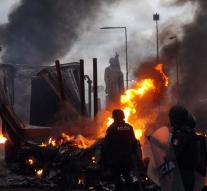 - By protests from members of a teachers' union on Sunday six people were killed in southern Mexico and 53 people were injured when they encountered the police, who wanted to lift a blockade of a highway. Among the wounded were 45 agents, 21 people have been arrested.

According to police, the largest rioters were not members of the union, but the protest was infiltrated,, 'by gunmen. Masked men threw Molotov cocktails and fired at officers and civilians, said Enrique Galindo, head of the federal police. The riot police responded in turn with tear gas.

The protests which lasted for several days, took place in Nochixtlan, 80 kilometers northeast of Oaxaca, capital of the eponymous state.