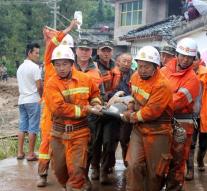 peking - A landslide in China caused a loss of at least 24 people on Tuesday.

Heavy summer rainbreaks led to flooding and landslides in many parts of the country. Especially the Sichuan province in central China was hit hard. There was also an earthquake later on Tuesday with a force of 6.5, reported Xinhua Press Office.

There is nothing known about damage in the province as a result of the quake. Due to the landslide, 71 houses collapsed and five hundred people were affected. The authorities estimate the damage so far converted to more than 20 million euros.