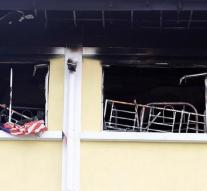 kuala lumpur - A fire in an Islamic school in the Malaysian capital Kuala Lumpur has costed at least 24 people on Thursday.

According to the fire brigade, 22 pupils, boys aged thirteen to eighteen years, and two guards were killed in the fire. Seven people were taken to hospital, eleven people were rescued.

The fire emerged at the beginning of the morning (local time) in the bedrooms on the top floor of the three-storey building, presumably by short-circuiting. The dormitory had only one door, leaving the students enclosed. Most of them are probably stung by the inhalation of smoke.

The Darul Quran Ittifaqiyah School is a so-called tahfiz school, where students learn the Quran. The students are usually between five and eighteen years old. Tahfiz Schools do not fall under the Ministry of Education, but are under the supervision of religious authorities. Since an eleven-year-old boy in a school in Johor died last April after abuse, the schools in Malaysia are under fire.