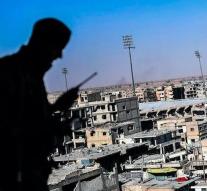 washington - At American missile attacks in Yemen, tens of thousands of Islamic state (IS) warriors have been killed on Monday. The attacks were conducted on two training camps of the terrorist movement, reports the US Department of Defense.

IS uses isolated areas in Yemen to prepare attacks on the United States and its allies, the Pentagon adds. In the camps in the province of al-Bayda, new IS fighters learned, among other things, shooting with machine guns and rocket launchers.