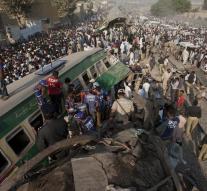 - In a collision between two trains in the Pakistani port city of Karachi on Thursday at least sixteen deaths. At least forty people were injured, the police reported.

The collision, near a railway station, two intercity trains were involved. Rail traffic between Karachi and the rest of the country is shut down.

In September, there was also a major train accident when two trains collided in the Punjab province. Then there were four deaths and 93 people were injured.