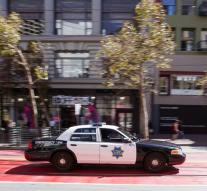 wasau - In a series of shootings in the US state of Wisconsin are Wednesday four people, including a policeman, deceased. The shootings took place in a bank, a law firm and an apartment in the vicinity of the city Wasau.

The suspect was surrounded by police and has surrendered after several hours. Police have given no motive for the shootings yet, CNN reports.

According to US media were there first shots at a local bank and ten minutes later with a law firm. The suspect then had holed up in an apartment in nearby Weston. After negotiating a few hours was followed by another shoot-out. It hit a policeman fatally injured.