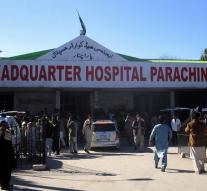 parachinar - At least fifteen people were killed Sunday in a bomb attack on a market in Pakistan. 47 people were also wounded, writes the Pakistani newspaper Dawn. About fifteen injured, according to a doctor at a hospital in severe pain. Shall take into account that the death toll still rising.

The bomb went off in a crowded second-hand clothing market in Parachinar in the northwest of the country. Responsibility for the attack has not been claimed. The area is known as a place where regular tensions between Shiite and Sunni Muslims.