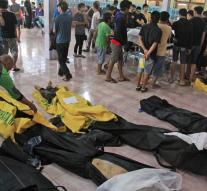 manado - At least seventeen people died early Sunday in a fire in a karaoke bar in Indonesia. 71 others have been hospitalized because they had inhaled smoke, writes The Guardian.

The fire broke out around 01. 00 hours in the crowded bar in Manado, the capital of the island of Sulawesi. Hundreds of partygoers were packed in like rats in a trap. A few people slammed into windows in panic, but that could very few people from the property.

Employees attempted to extinguish the fire even with fire extinguishers, but could not. The fire department needed a few hours to get the fire under control. According to eyewitnesses, the firemen came also was only an hour after the fire started.