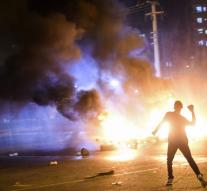 diyarbakir - Certainly eighteen people have been slain Wednesday in southeast Turkey in clashes between soldiers and Kurdish militants. The fighting flared after the army a day earlier had conducted air strikes in the mainly Kurdish region.

Among others, two soldiers and fifteen militants of the Kurdistan Workers' Party (PKK) were slain in clashes near the village of Daglica on the Iraqi border. Turkish jets fell Tuesday for the second day in a row PKK targets in northern Iraq, the military said.

The AK Party obtained Sunday again a parliamentary majority in the elections, which are a major victory for President Recep Tayyip Erdogan. He had even promised Wednesday to continue the operations against the PKK until every last rebel is " wound ". A two-year truce which had defended Erdogan, collapsed in July.