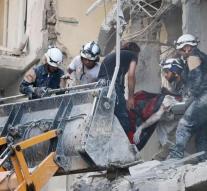 - Air strikes in northwest Syria on Friday at least 22 people killed. It reports the Syrian Observatory for Human Rights.

Target of the bombing was Darkush town, in Idlib province, near the border with Turkey. Idlib province and the capital are strongholds of several rebel movements, including affiliated to al-Qaeda-Nusra Front. The Observatory expects the death toll continues to rise, given the large number of wounded.

The Syrian army Wednesday announced a truce of 72 hours, but according to rebels and the Observatory, the violence has since diminished barely. Syrian government troops arrived Thursday something closer to the complete encirclement of Aleppo, which is partly in the hands of rebels.