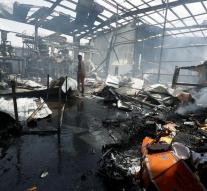 aden - Least nine people on Tuesday were killed by air attacks in the Yemeni capital Sanaa. Fighters of the pro-government coalition of Sunni Gulf states bombarded include a factory according to local sources where potato chips are produced.

Gears coalition would also have military bases and struck a presidential complex, but as far as is known there were only victims in the factory. According to residents of Sanaa concerned the first bombing in five months. Pro-government forces trying to gain control of the city again.

Talks about ending the conflict in Yemen were suspended this weekend. Shiite Houthi rebels are in the country against the internationally recognized government of President Abed Rabbo Mansur Hadi, who has the support of Saudi Arabia and other Gulf states.