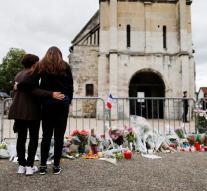 rouen - The 86-year-old priest Tuesday brutally was slain by two IS terrorists in a church in Normandy, was there because the fixed fourth priest of the church holiday.

Jacques Hamel took the things for Auguste Moanda-Phuatu, who is in shock after the murder. 'I should have been' let the Frenchman of Congolese descent know the French news BFMTV. Moanda-Phuatu stresses Hamel could have been ten years before retirement. 'But he said he wanted to work until his last breath. '

The perpetrators, who claimed to act on behalf of terrorist group Islamic State, after the assassination, which followed a gijzelingm shot dead by police. A third man has been arrested on suspicion of involvement in the murder.