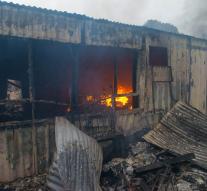 - Forest fires in southern Australia certainly claimed two lives. Three people are missing and thirteen were wounded. Also, according to the Australian authorities, thousands of animals died and sixteen houses were destroyed.

Spread over an area of ​​over 200 square kilometers emerged Wednesday fourteen fires, which quickly expanded. The deaths occurred in two different fires. Of the five injured, according to the premier of the state of South Australia very bad shape.