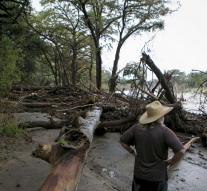 - Because of bad weather in the US state of Texas Friday least two deaths. The cars of the men were swept away when fields were flooded by torrential rains. South of the city of Austin fell in a few hours more than 30 centimeters. An older woman is missing.

A storm with lots of rain and winds swept Texas. Also emerged tornadoes, which include damage was caused to houses and trees. More than forty times the emergency services had to take action to save people who had become trapped by floods.

Air traffic at the Austin airport was shut down for hours. There was 15 centimeters of water on the ground floor of the control tower.