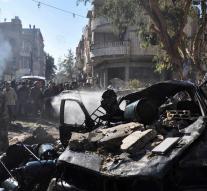 - A suicide bomb attack on a government building in Pakistan Tuesday at least 22 people killed. According to an employee of the emergency, there are more than thirty wounded.

The suicide bomber, who was on the motorcycle, blew himself up at the entrance of the office in the northwestern town of Mardan. The building identity documents are issued and usually people waiting in long lines.

A large proportion of the injured is in bad shape. There are fears that the death toll continue to rise.

About the background of the violence is nothing yet known.