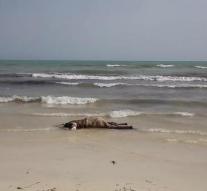 - Presumably, more than 3,600 refugees worldwide this year died. The International Organization for Migration (IOM) late Thursday know that there are at least 3694 dead or missing counted in the first six months of this year.

An increase of 18 percent compared with the first half of 2015, according to the IOM.

The most dangerous escape the world turns out to be the trip across the Mediterranean to Europe. Just on that route found this year 2905 people died or went missing. A large majority of more than 2,500 refugees drowned on their way to Italy.