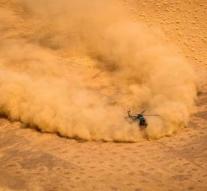 timboektoe - At two attacks on UN buildings in Mali, at least nineteen people were killed on Monday. Unknown Monday, a UN camp took place in the capital Timbuktu, with fifteen deaths, including a citizen, an agent and five guardians. Six attackers were killed.

On the early Monday morning there was already a UN-based attack in Douentza, with four deaths.

Mali is regularly plagued by terrorist attacks by Islamist militants, despite the presence of the Blue Helmets. In northern Mali there is a power vacuum that jihadist groups use to make attacks throughout the region.