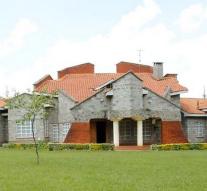 eldoret - During the attack Saturday at the residence of Kenyan Vice President William Ruto in Eldoret, an armed man and a police officer were killed, the authorities reported Sunday.

In view of the shots, the police initially thought that there was more than one attacker because he had used several firearms. 'But after we turned him off, we found only a dead man and our policeman who had killed him,' said a police spokesman. There is nothing known about the attacker's motive.

Police said on Saturday that a man with a knife was behind the attack. The attacker would have hit an agent with a machete. He would then have granted access to a security guard of the guards and wrecked weapons. 'The weapons he used were from us,' said the police

Ruto left local media shortly before attacking home to run campaign. The Kenians go to the polls in early August. President Uhuru Kenyatta, Ruto's boss, hopes to be re-elected for a second term.