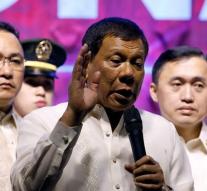 manila - Several police actions in the Philippines killed fifteen people on Sunday, including the mayor of Ozamiz City. The actions are part of the bloody battle that President Rodrigo Duterte conducts against drug trafficking in the country.

Police instances occurred on the southern island of Mindanao, reporting Filipino media. Reynaldo Parojinog, Mayor of Ozamiz, came to one of the actions for life. Also, his wife, brother and sister did not survive. Parojinog was suspected of drug trafficking.

According to a police spokesman, the mayor had a private army of security officers around him who opened the fire when agents entered. Parojinog's daughter and also the city's city mayor was arrested. Parojinog is the third mayor who died during Dutert's war on drugs.

Internationally there is a lot of fuss about how Duterte tackles the drug problem in the country.