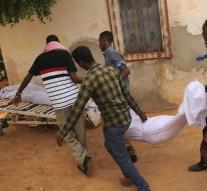 mogadishu - At least eight people were killed by a suicide attack in Somalia. The perpetrator drove a vehicle to a checkpoint about 15 kilometers from the capital Mogadishu and blew himself up, sources said within the security services. Terror organization al-Shabaab has claimed the attack.

A police officer said that at the moment of the attack many vehicles were waiting at the checkpoint. A witness stated that he had heard a huge explosion and shots. Then large clouds of smoke rose. A spokesperson for al-Shabaab underlined that 'many security forces' were present at the post.

The poverty-stricken East African country is regularly startled by bloody attacks. A spokesman for the peace mission AMISOM announced that at least three people were killed by a mortar attack on Mogadishu on Thursday. Two other people were injured.

Due to an attack with two car bombs, there were dozens of deaths in Mogadishu on Friday. In October, more than five hundred people were killed by a heavy bomb attack in the city.