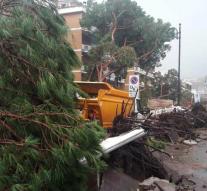 rome - The severe weather that plagues Italy has killed five people on Monday. That happened at various places in the country. Two young people died south of Rome because a tree fell on their car. The same happened to someone in nearby Terracina and a walker in Naples. A woman was mortally wounded by flying debris.

Schools were closed in the Italian capital, as well as in dozens of municipalities in the north. The storm and heavy rainfall caused severe damage here and there.