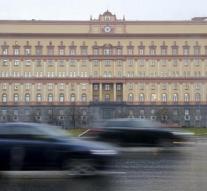 moscow - Certainly two people were killed by a foul in a regional headquarters of the Russian secret service FSB in Chabarovsk. A man opened the fire in the lobby of the building on Friday, reported Russian media.

According to the FSB, the man did not go through the checkpoint in the building, but started shooting earlier. An employee of the service and a citizen did not survive. Another visitor shot shotwounds. The perpetrator has been shot dead.

According to the FSB, the shooter is a man born in 1999 from the region. There are indications that he had ties with a group of neonazi's.