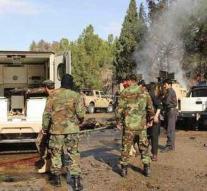 kabul - A rocket attack on a passenger car has cost the lives of at least seven civilians in eastern Afghanistan. Among the victims are women and children, said a spokesperson for the provincial authorities in Nangarhar. The victims would have been on their way to a funeral.

The driver had driven on Sunday evening when a Taliban fighter wanted to keep the car standing. Then other rebels fired the missile, the spokesman said. They would also have taken their own comrades.

A Taliban spokesperson denied that his organization was responsible for the attack. He pointed out in a text message with an accusing finger to terrorist organization Islamic State, which is also active in Afghanistan. The spokesman later wrote on Twitter that the perpetrators were part of 'a gang of kidnappers'.