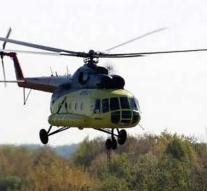 oelan-oede - In an emergency landing of a helicopter in eastern Siberia, according to the Russian authorities, at least four people were killed. The helicopter collapsed on Sunday near the city of Ulan...

According to reports in the local media, the helicopter has completely burned out. Due to bad weather conditions, the pilot reportedly could not land as planned.

The victims would be a group of local business people who wanted to go on a fishing trip together.