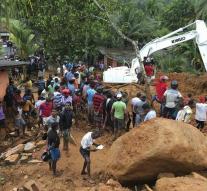 colombo - Floods and landslides in Sri Lanka have killed at least 55 people on Friday, local authorities reported. More than forty people in the south and west of the country are missing. Sri Lanka has been plagued by severe storms for many days.

The army has been erected by boats and helicopters to put as many people as possible in safety. Hundreds of people had to leave their homes in a row.

'There have been at least five landslides at various places in Kalutara,' said a police spokesman on the worst-affected district on the west coast.

The rain showers in Sri Lanka are not uncommon. The rainy season runs from May to September.