Home / World / Kill by explosions at burial in Kabul 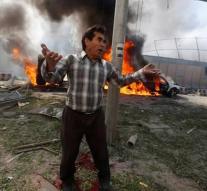 cabul - At least three explosions in the Afghan capital Kabul have costed about twenty people on Saturday, reported various local media based witnesses. The explosions occurred around the funeral of a protester who died a day earlier in a demonstration against the government.

It was about the funeral of the son of an Afghan senator. At the clash between Afghan security forces and the protesters in Kabul, five were killed. The more than one thousand activists demanded the resignation of President Ashraf Ghani and Prime Minister Abdullah Abdullah.

They hold the duo responsible for the onslaught of Wednesday with a tanker of explosives in a neighborhood with embassies and ministries, causing about ninety deaths.