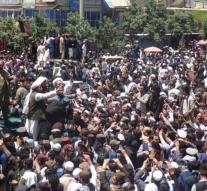 kabul - By an explosion, at least twenty people were killed on Saturday during a festive gathering of unarmed Taliban fighters and Afghan security officials in the eastern province of Nangarhar. This has been confirmed by the governor's spokesman.

According to the first reports among the victims, except for soldiers, there are also civilians. It is still unclear whether it is an accident or an attack. Initially it was suspected that a rocket in a Taliban vehicle had exploded. According to local authorities, it was a car bomb.

Being together stood in the context of the three-day truce that the Taliban proclaimed at the end of Ramadan to celebrate the Sugar Festival.