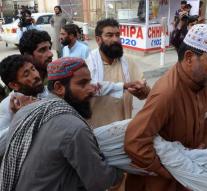 islamabad - Friday, dozens of people were killed by two bombings at election meetings in Pakistan. Most of the victims, 128, fell through an attack in the southern province of Baluchistan.

Among the dead there was a candidate for the elections on 25 July. The meeting was attended by more than a thousand people. The terrorists would have blasted eight to ten kilos of explosives. More than 120 people were injured. The attack was claimed by both a local division of the Taliban and Islamic State.

The other attack was in the city of Bannu in northern Pakistan. Five people died there. During a speech by a candidate for the elections, a bomb went off. The politician remained unharmed.

Tuesday there was also an attack during an election meeting in the city of Peshawar that killed twenty people. That attack has been claimed by the Taliban. Who is behind the latest terrorist acts is not clear.